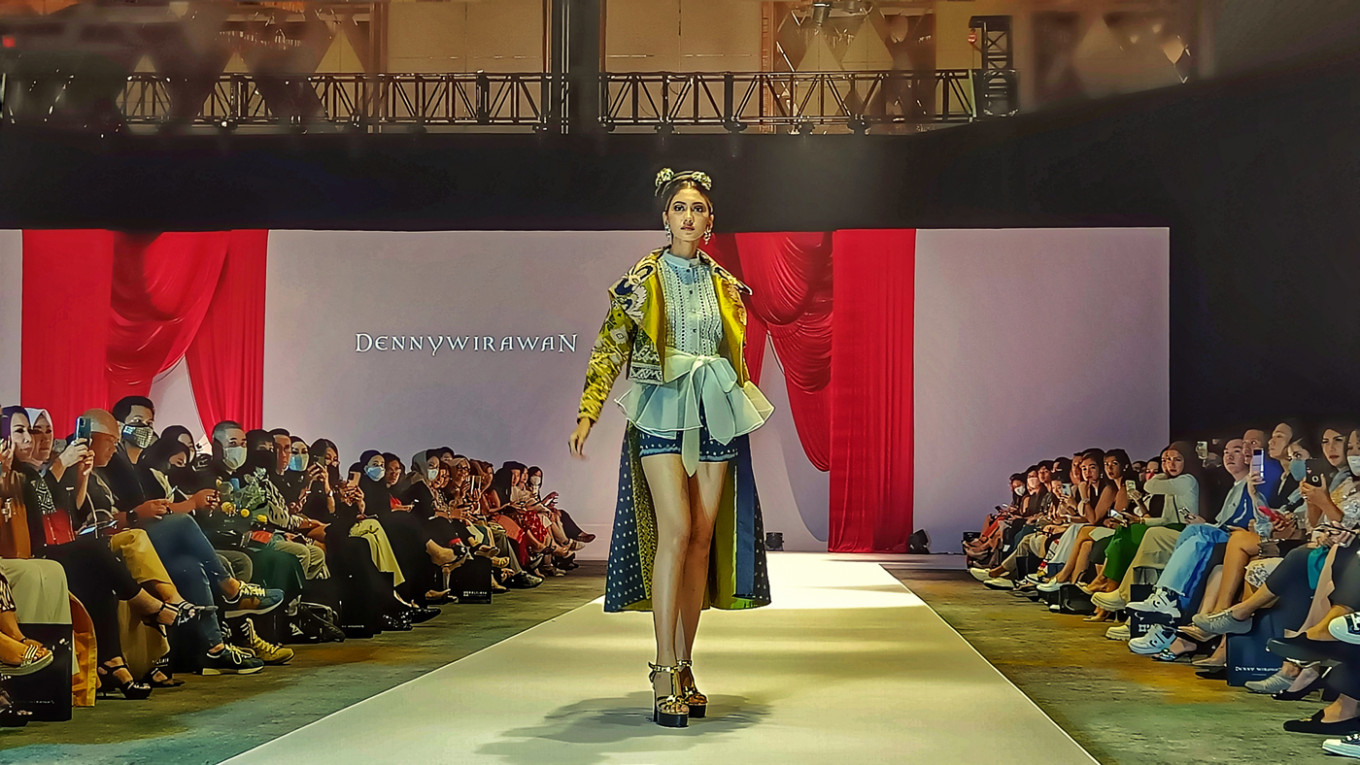 Indonesian fashion designer Denny Wirawan celebrates the 25th anniversary of his career and wishes for the future.

The journey of a thousand miles begins with a single step, wrote Chinese philosopher Lao Tzu. But this single step is also made of a thousand dreams, determination and hours of hard work and the will to move forward despite all the obstacles.

For Indonesian fashion designer Denny Wirawan, the first brave step in his career was in Jakarta in 1996.

“I started my first label in 1996,” Denny said in an interview with Jakarta Post before her fashion show at the InterContinental Jakarta hotel on September 28. “Since then, I have continued to move forward, process and learn.”

The ballroom was overflowing with Indonesian celebrities and the crème de la crème attending the show.

The Bali-born designer spent most of his formative years in Surabaya. It is also in this city that Denny’s passion for fashion was born.

As a young boy, Denny enjoyed hanging out in his mother’s barbershop and browsing through stacks of fashion magazines provided to customers. Intrigued by the models who pose elegantly in magazines, the little boy imagines himself as a designer and begins to design beautiful outfits for them.

Through practice, Denny improved his skills. In high school, Denny designed outfits for his friends and family and had them made by tailors.

After graduating from high school in 1986, Denny enrolled at the prestigious Bandung Institute of Technology (ITB), planning to major in fashion and textile design.

“I didn’t pass the entrance test,” Denny said with a chuckle. “Twice.”

But Denny didn’t dwell on his failures. Convinced of his talents, Denny then entered a fashion design competition organized by an international yarn company in Surabaya.

A friend introduced Denny to the owner of a textile shop in Plaza Surabaya, an upscale shopping mall in the city, who then agreed to sponsor him and provide all the fabrics needed for the contest.

The budding designer came out second in the competition. And when Denny returned to the store to thank the owner, he received a job offer.

“I was very young and inexperienced,” Denny said, his voice trailing off in a wave of emotion. “But [the owner] already trusted me to work in his shop.

In the textile shop, Denny was tasked with designing bespoke outfits for customers.

“I remember my hands were shaking when I first drew a dress in front of the client,” he said.

Denny worked and honed his skills in the textile studio for four years.

In 1991, the young designer tried his hand at another fashion design competition. Organized by Femina magazine, Denny competed against thousands of creative fashion talents from across the country.

“I came out as a finalist but I felt like a loser because I didn’t win [the competition],” he said.

Denny decided to also study at school to become an accomplished fashion designer.

In 1992 Denny quit the textile shop and moved to Jakarta to start studying at LPTB Susan Budihardjo.

“As someone who grew up in Surabaya, I guess I’m equipped with bonho nekat [bravery that comes from being desperate]laughed Denny.

But bravery alone is never enough. To survive in the capital, Denny had to look for a job.

“It was like deja vu,” he said. “A friend introduced me to Prajudi [Admodirdjo], who was then looking for an assistant designer. He didn’t mind that I had just started my fashion studies. All he cared about was that I could draw.

Prajudi Admodirdjo was a renowned fashion designer in Indonesia between the 1970s and 1990s. His clients included the second Indonesian President Soeharto and his family.

Prajudi not only employed the fledgling designer as an assistant but also entrusted him with her new ready-to-wear brand, Bianglala.

“It’s become an invaluable lesson for me, especially as I plan to build my fashion brand,” Denny said.

Prajudi died in 1995. And a year later Denny quit the studio and started his brand.

Twenty-five years later, on the occasion of the anniversary of his career, Denny wanted to present a gala trunk show to his friends and clients.

“I had wanted to celebrate my 25th birthday last year, but it was impossible because of the pandemic,” he said.

The Trunk Show opened with video of Denny, dressed in a white shirt and Balinese sarong, walking barefoot on a beach, leaving a trail of footprints behind him. Shortly after, two young girls dressed in white kebaya and wearing banten (Balinese offerings) in their hands, emerged from the backstage and walked the floor, spreading the fragrant incense smoke throughout the ballroom and blessing the show.

In the first segment of the show, Denny showcased men’s and women’s tunics, overcoats and jackets made from the vibrant Tenun Endek from Bali. These exquisite hold were made by traditional artisans in Singaraja, North Bali, using natural dyes.

“Caring for the environment has become my main concern these days,” the designer said.

In the show’s second sequence, Denny combined Batik Kudus and Balinese Tenun Gringsing in a series of evening dresses and trouser suits.

“Tenun Gringsing is made with one of the oldest and rarest hand weaving techniques, double ikat [tie-dye]”, Denny said. “Therefore, I didn’t cut any in my outfits.

Craftsmen make Tenun Gringsing in Karangasem, Bali, by tying the threads onto the weft of the loom and warping them to create rich, ornate designs. Due to this complicated technique, a piece of Tenun Gringsing can take from one to five years.

To honor the ancient technique of Tenun GringsingDenny didn’t cut any, but instead pleated and draped them elegantly over his dresses.

The third sequence of the show featured the lustrous Balinese Songket from Sidemen, east Bali, which has also been twinned with Batik Kudus.

Made from recycled yarns, some of the Songket had unique color gradients.

Denny also trained the artisans he worked with to soak the fabrics in a particular herbal concoction to make them softer and more comfortable to wear.

“It is indeed a challenge to meet so many craftsmen, to communicate with them and to direct them towards a breakthrough with a new technique”, confides Denny.

“Denny has always been consistent in showcasing traditional Indonesian textiles in his collections and thereby perpetuating Indonesia’s cultural heritage,” said Renitasari Adrian, program director of the Bakti Budaya Djarum Foundation. “He has also inspired many young Indonesians with his expertise.” 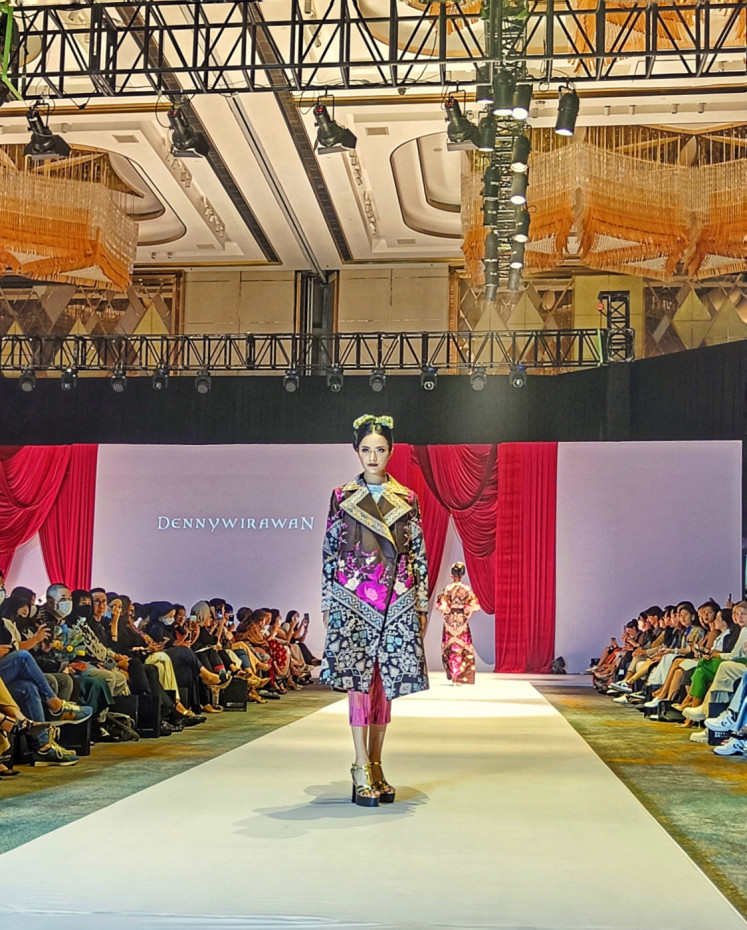 “mas [Brother] Denny gave traditional Indonesian textiles a modern and international look and made us proud,” the 33-year-old schoolteacher said in the October 15 phone interview.

From July 29 to August 13, Denny Wirawan mentored 103 SMK NU Banat students and taught them how to conceptualize a fashion collection, design outfits in a sustainable way, and organize a fashion show.

“mas Denny is an awesome fashion designer and mentor,” Lilik said. “I wish him the best for his career.”

At the end of the interview, just before the start of the fashion show, Denny expressed some wishes for the future of his career.

“I wish God gave me many more opportunities to work and inspire others,” the designer said. “I also want to explore many different regions of Indonesia and discover more traditional textiles for my next collection.”